Alan Doherty and I wrote Takika Rain a few years ago. It was resting silently in a drawer until Alan pulled it out for his new project, ALDOC. His bandmates, Gerry Paul and Rasmus Steenholdt Skovmand, added some delicious final touches to the tune.

The full album is available on iTunes

A new music video from Athena Tergis and myself. It features two traditional tunes we recorded at her vineyard, with photos from the beautiful landscapes in the area.

I’m interviewed by Thomas Garlov in the DJBFA magazine on the commodification of music. Read it here, on pages 18 and 19 (in Danish)

Athena Tergis and I now have a YouTube channel. We’re looking forward to doing more videos, both formal and informal.  Here’s a clip of the closing tune from our concert at Festa Della Musica di Montalcino. 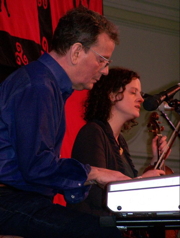